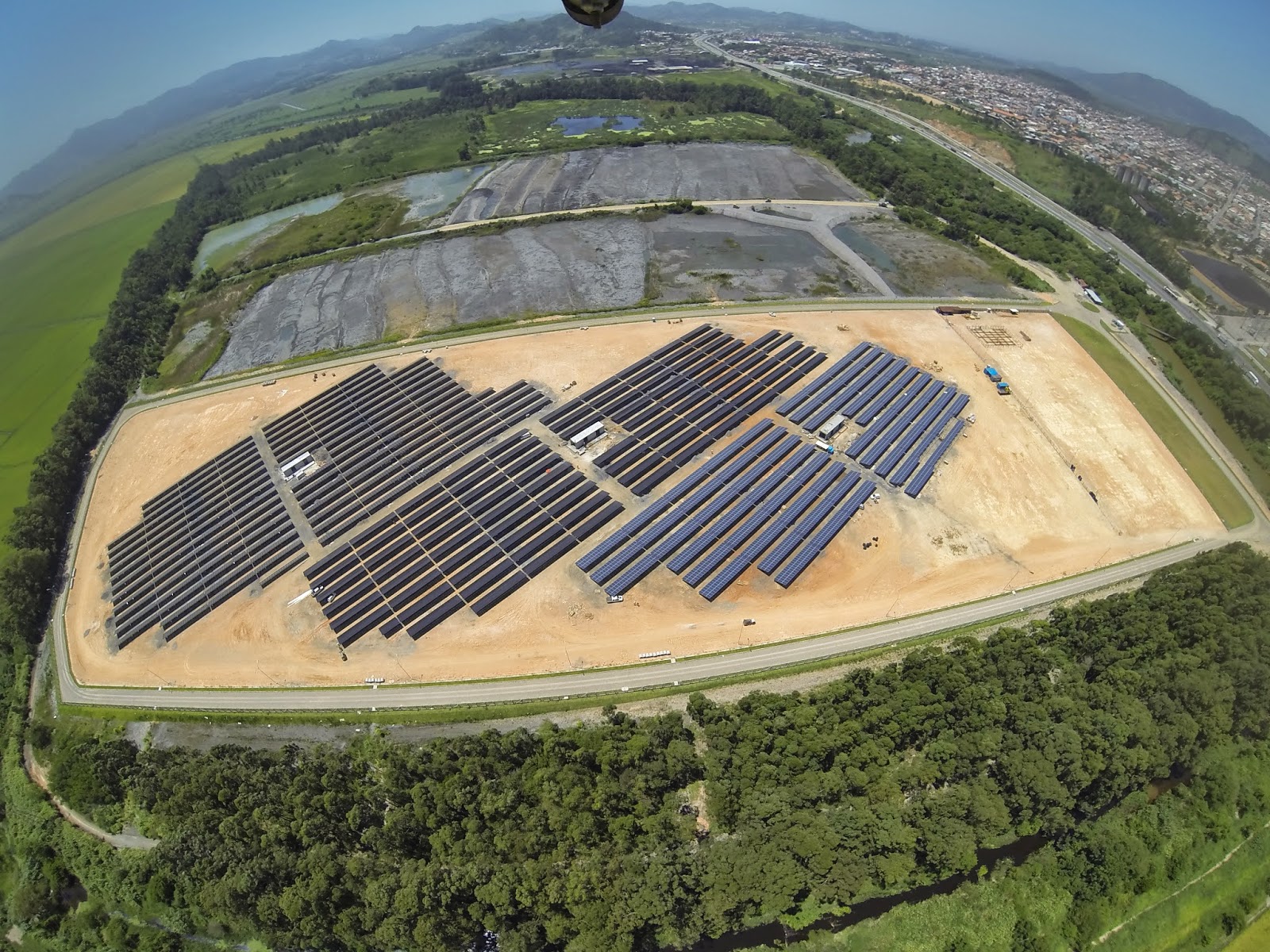 Using clean and inexhaustible energy (at least in our human terms) is an aim for informed user who enjoys the comforts of modern life. In a region blessed by the sun, this type of funding should have already been further explored. The reasons why this has not happened on a larger scale are many, including the still high implementation costs. But if the cost of photovoltaic panels production may be decreasing in Brazil, there are still some bottlenecks to the implementation of solar energy harvesting on a large scale, even though there are already proposals to its insertion in the Brazilian energy matrix.
So the efforts being made for this to happen should be praised. One of them being the opening of the largest solar plant in the country in therms of power: Usina Cidade Azul (Blue City plant), located in the city of  Tubarão in Santa Catarina state. The name of the plant was a community choice made trough internet. The very location of the plant has been a strategic and symbolic choice because of its proximity to the Thermoelectric Complex Jorge Lacerda, considered the ” biggest thermoelectric coal complex from South America.” Coal, besides being a non-renewable energy, is responsible for serious pollution in the atmosphere.

The Blue City plant (3 MW), although not the largest in capacity, as the Eneva Plant (Tauá – Ceará state – 5MW), produces energy to power around 2,500 homes. And is the largest solar power plant in size in Brazil with “19 424 solar panels installed on a 10 hectare area.” It is a partnership of Tractebel Energy with Federal University of Santa Catarina (UFSC) and from now on also connected to the Brazilian National Interconnected System (SIN).

A curious feature of these project is that different technologies are being tested to determine which fits best with the many climatic differences in Brazil.According to the project manager, engineer Maury Garret da Silva, “to analyze the technology that is best suited to the country’s climatic conditions is very important as the performance of the panels varies by temperature and humidity. In the plant, many facilities have been evaluated and tested before entering into commercial operation, including three technologies of photovoltaic panels (polycrystalline silicon, amorphous silicon microcrystalline and CIGS) and five models of inverters. The polycrystalline silicon is the most globally consolidated, covering about 80% of the solar market but it also presents greater losses with increasing ambient temperature. While the amorphous microcrystalline silicon, thin film technology, is the one that has lower losses with increasing temperature. CIGS, also thin film, presents intermediary losses due to temperature.” (Source)

There are currently 164 operative solar plants in Brazil (according to the Brazilian electricity Agency – Aneel). But it’s still not enough and there is a large terrain to be crossed as this generation represents only 0.01% of the energy demands in the country. But it is expected that the use of this energy source should grow with the implementation of Resolution 482/2012 that “allows Brazilians to generate energy, transfer their production to the grid and in case of surplus, earn discounts on the electricity bill trough the Energy Clearing System. “

The use of solar energy, like the others,has advantages and disadvantages. Among the positive, cleaner energy require minimal maintenance on their core, the cost of the modules is in constant decrease and it’s also a convenient solution for inaccessible regions and small scale communities. Among the disadvantages, the variations on yield and low efficiency in storage systems.We can see that in the world there are examples of large solar power plants and the increase of its use in Brazil may be inspired on other countries, such as the model adopted in the United Kingdom through cooperatives, it’s already known that more than generate, transmit or distribute energy, cooperatives provide social inclusion and better standards of living to the community involved. A model that deserves more attention is the one from Tesla Institute, proposing, among others, a solar village where photovoltaic solar energy would be used in indigenous villages and remote locations.

Here a video that shows, quite simply, how the photovoltaic power generation works:

This site uses Akismet to reduce spam. Learn how your comment data is processed.